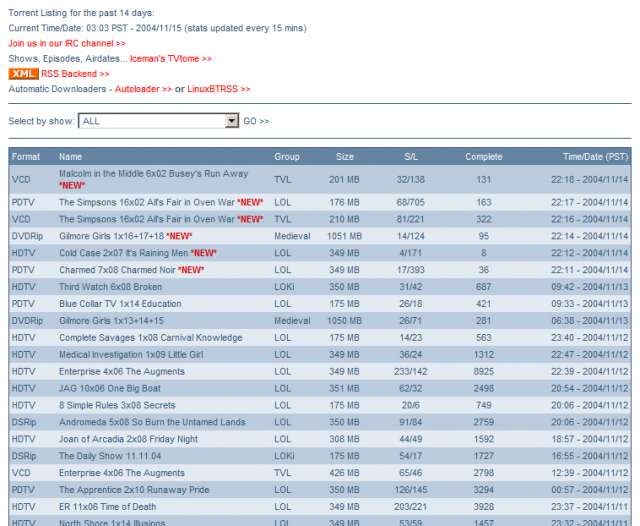 Idiots. Complete, utter, idiots. Who's running the show, so to speak, at the studios that put out all the TV that clogs the air and cable? I'd like to sit them all down in a room and knock all their heads together like dominos in a row. Another facet of a brilliant piece of technology was apparently squashed tonight as the site btefnet.net that hosted super fast downloads of TV shows went down. The technology behind it is the BitTorrent (background via NPR) wherein a de-centralized network of people download files while simultaneously allowing others to download from them. The beautiful part comes from the fact that one user can begin downloading a file from someone else even before that other user has the complete file. Brilliant. It's the only way to share these large files without having to have a farm of servers to meet the needs.

Anyway, an NPR commentator said it best when he voiced the opinion that the TV studios need to proactively come up with an option people who illegially download their shows can buy into (figuratively and literally). I want to watch my show(s) on my computer whenever I want and I don't want a Tivo and don't want to wait until a set of DVDs come out two years later. It's all to pathetic that they can't just look toward a success like Apple's iTunes store and not say "Hmm... Let's sell our shows at a buck a pop and license out the BitTorrent technology to help us deliver our content in a cost effective manner."

But that's not going to happen. Another technology will push itself forward then be squished before someone finally gets the hint. TV is dying and the studios need to get in on this before we all move on and obtain our entertainment from somewhere else.

Or I could just stop watching TV... Nah.