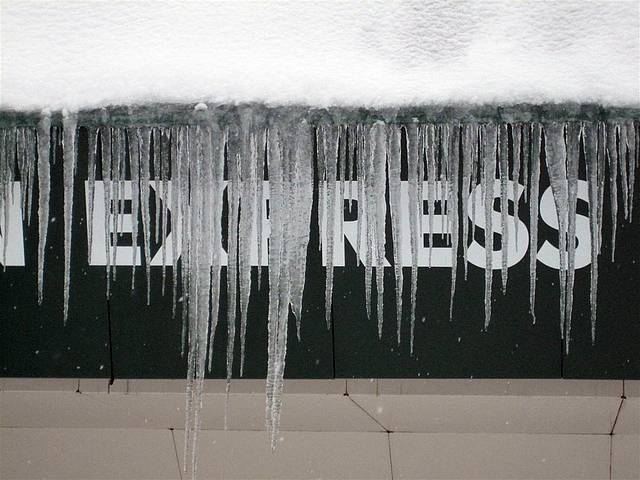 Great day snowboarding up at Crystal

After what I hoped would be a decent sized group trip my buddy Steve and I made up to the mountain today. A couple folks were still getting over some lingering flu bug so just couldn't justify exerting themselves up in the snow. My co-worker and her husband made it up but we only hung out with them from lunch on. The drive up was promising since we so snow dusting the hillsides leading to the Cascades. Just outside Enumclaw it was clear how much snow they'd been getting the last couple days because we don't often see it down that low.

Once at Crystal we knew there'd be gobs of people up today. We arrived a half hour before opening and still had to park a couple lots away from the lodge. It was quick and easy to buy our lift tickets and from there we grabbed a quick run on the bunny hill to warm up. Yea, even on the usually most hard-packed run there was enough powder that we could hear the boards of people sliding down the hill below us as we sat on the lift. Once warmed up we waited in a lengthy line to head further up the mountain. And there we stayed most of the morning -- not in line but up on a couple higher green runs. Everything was totally smooth and the powder lent for a nice controlled speed that is faster than I'm used to but never felt out of control.

Steve and I were able to open it up a little and have some fun. The powder was totally forgiving which let us just plain enjoy. Once we had some lunch in us we headed back up and the conditions had changed. Where there was smooth powder there was now loose snow shaped into plenty of moguls. They were terrible but certainly didn't make for carefree runs. Steve twisted his knee getting off a lift and had to be escorted down by the ski patrol. This really stunk for him but it wasn't anything serious. I continued on for a couple more runs with Reena and Galen then met back up with Steve who was walking around just fine and dandy. Guess he threw a little dirt on it. ;) He even said it wasn't enough to deter him especially after the great runs we had this morning.

So, in all, a good trip and great one for me with only one moderately hard fall and a few others that were more me just sitting down or getting a little tired.

Crowds of people waiting at one of the lifts 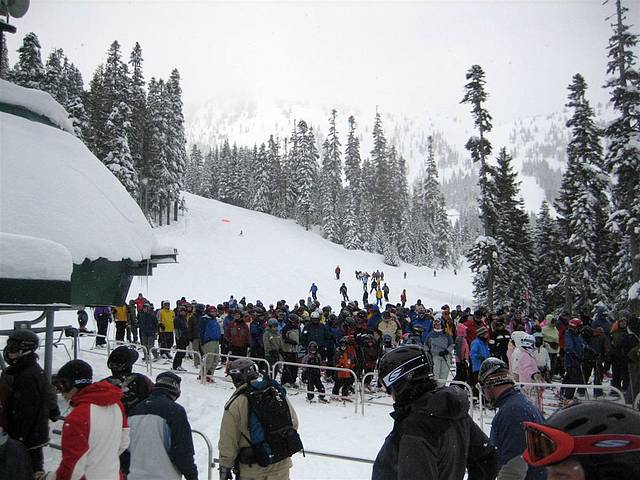 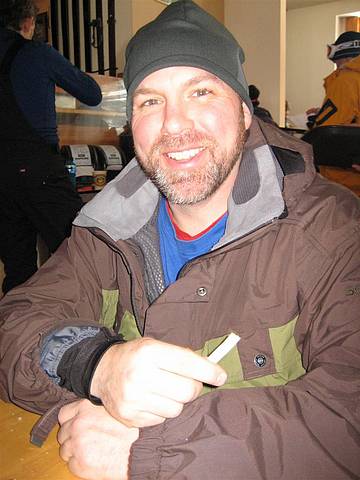 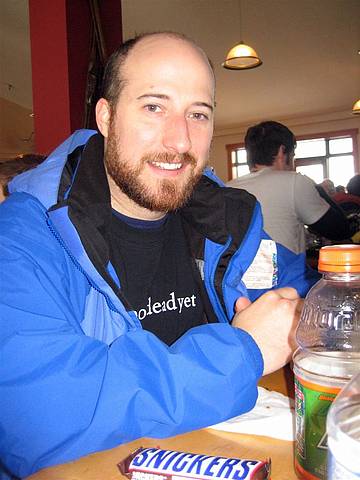 Even with a twisted knee, Steve had a smile on 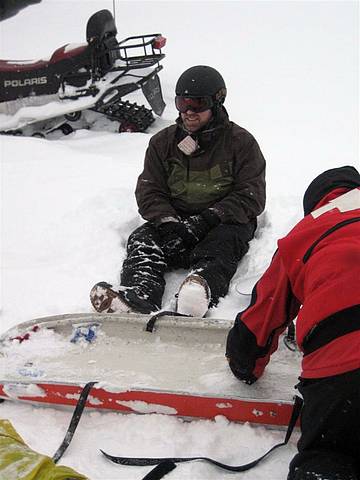 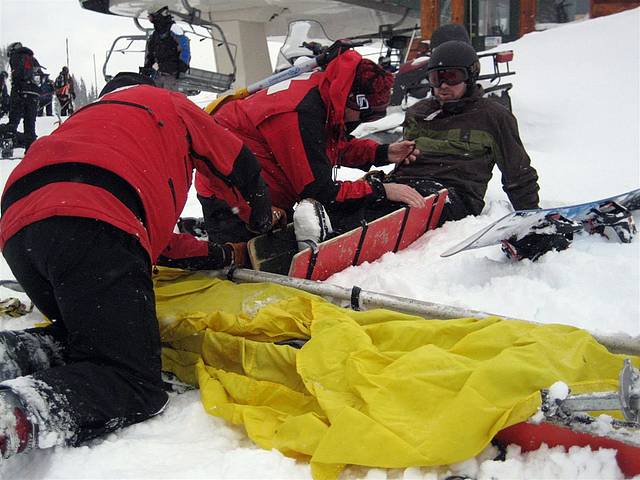 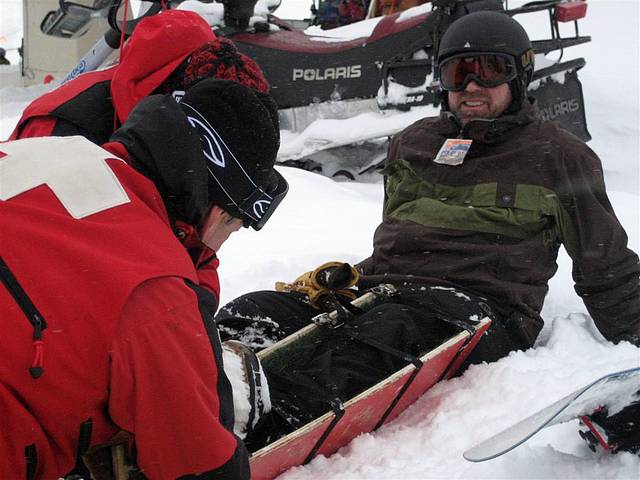 In his coccoon all ready to be towed down the mountain 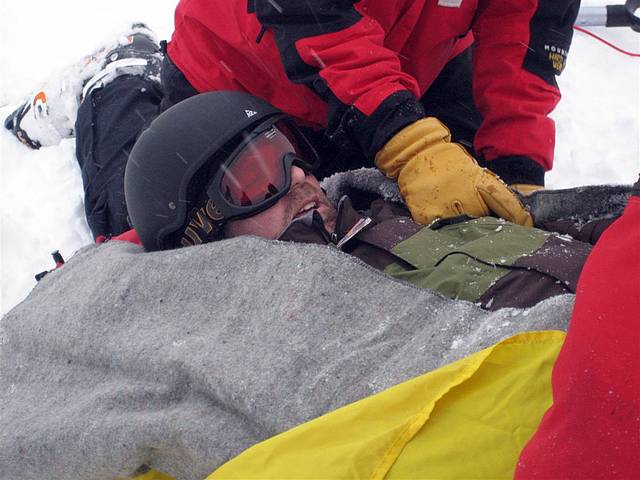 Me on my board stopped by/in some deep powder 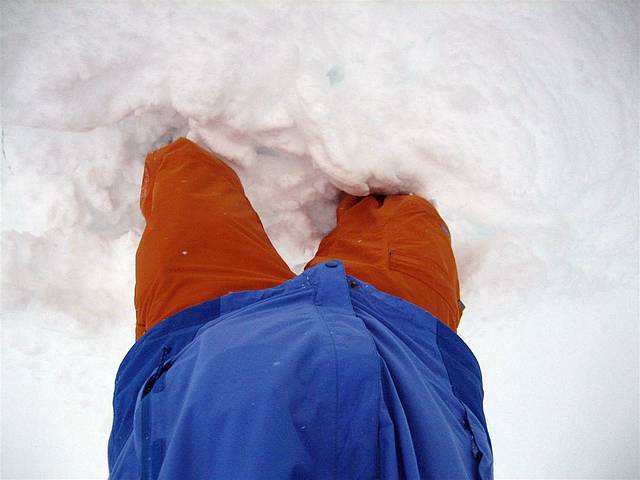 Me laughing about it 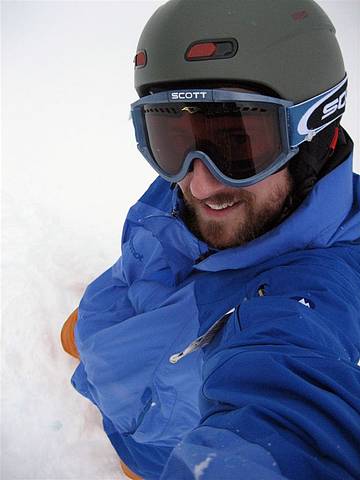 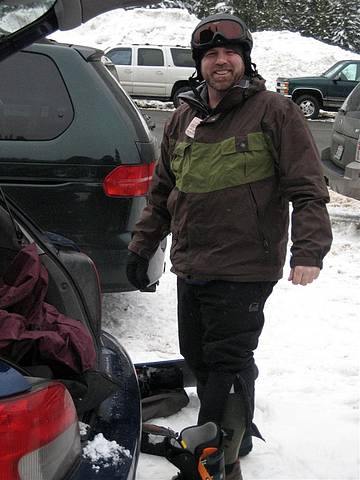 A beautiful drive down the mountain 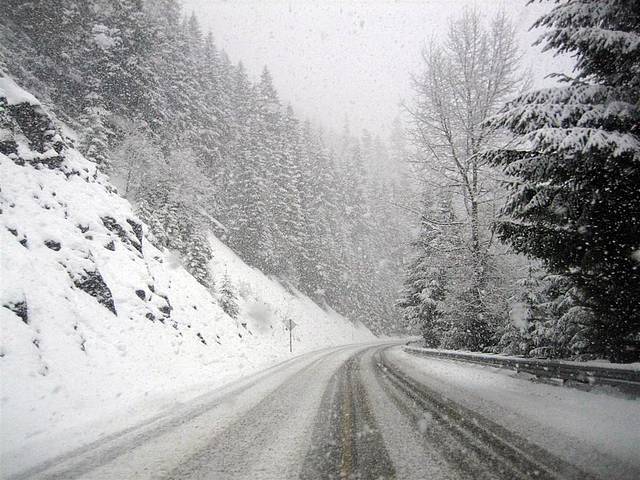 'Boarding the powder at Crystal

Mar. 11, 2006
I only wish I was cool enough to actually think I could speak snowboard. Lo, today I kept the training wheels on but had a great time in the...

Mar. 1, 2010
With 60 degree temps today in the lowlands it's no surprise that up at Crystal Mountain things were pretty balmy as well. But still fun as hell! College (and...

Dec. 17, 2008
And it felt great! My buddy Steve and I saw the impending storm coming this way that called for a foot or two of fresh snow in the mountains...