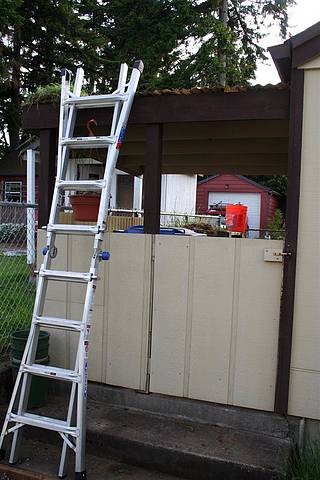 Sometimes I get a wild hair to start a new project. This one has been growing for a while now and I took a little time last Sunday to see what I could come up with. A small, corrugated covering over our recycling bins attached to the side of our detached garage is my target for a small, experimental DIY green roof. I've had my eye on this spot for a while because it meets a few different criteria. First, it's a small plot -- about 6' x 6' at most. As an experiment I don't want to take anything on that would be too grand a scale. Second, it's not over anything crucial. If any problems develop with leaks or even collapse of the supporting structure little can be harmed except for a couple plastic bins and a cement slab.

So why start now? Because only last week I realized I had everything I need to get started. My basic criteria above were met and I remembered that I have material to help make the roof green: dirt! After our recent front and back lawn replacement, we had some sod leftover from the back that's been piled up waiting to be done away with. Instead, I reasoned, why don't I put it to use for my green roof? So Sunday I started in. First my idea was to harvest the lovely grass growing from this pile to make up the roof itself. I put a few patches atop the roof but then decided to focus on dirt instead. I filled about 4 or 5 buckets full and hauled it up the ladder (not easy on the balance, mind you), dumped it and spread it out a bit.

So far it's held up to some funky June-uary wind and rain from yesterday. I also wet it down with the hose and was dazzled that none of that water immediately ran off the edge.

Next steps include first finishing up spreading more dirt. I'm going to keep the layer pretty shallow 'cause, especially when it's soaked with rain water, I don't want to put too much weight on the supports. I also want to figure out some kind of barrier to put against the garage side of this roof to protect it from any possible damage to the siding.

From there I need to decide what will make this roof green. I could, as mentioned use just grass but I'd like to go further. Given that the dirt won't be more than an inch or so deep, I wonder if there are any native plants, grasses, etc I could look at? A trip to the Tacoma Nature Center might be in order but I'm open to suggestions.

Structure of the roof 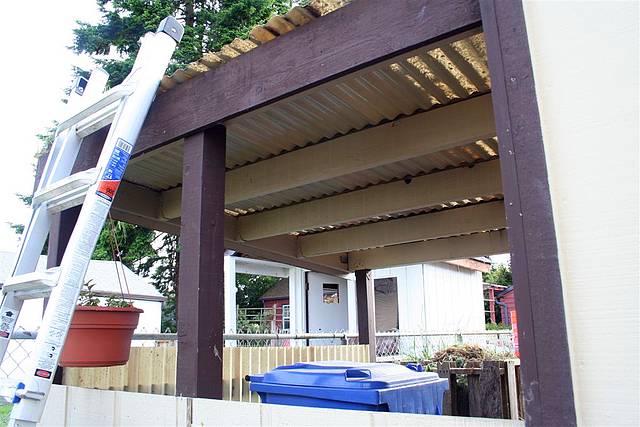 Close up of soil and some grass on the roof 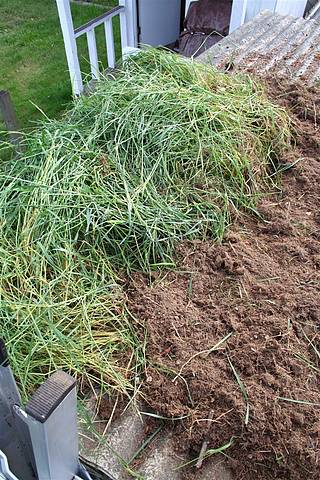 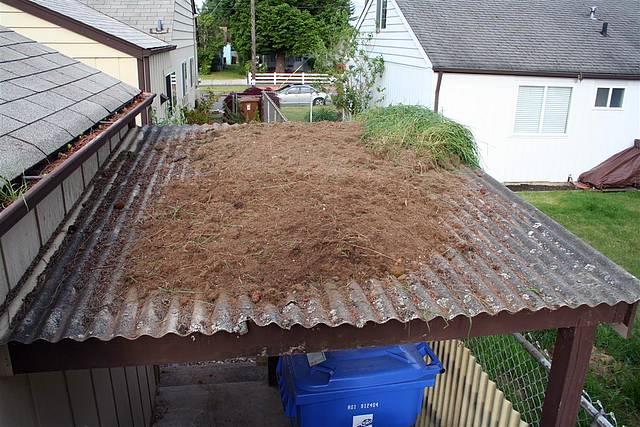 Aug. 10, 2009
You may remember that green roof I created a while back. Well, I thought the time was right to get serious so I set out late last week to...

Sep. 30, 2018
For our recent Tesla purchase, we opted to have our charger installed inside our garage while we park our car outside. Hey, 100+ year old houses were not made...

Jan. 8, 2018
A strange little spot between our garage and basement workshop was setup by the previous owners of our house Cordelia. It's basically a portion of the garage walled off...

Jan. 3, 2018
We recently renovated our kitchen and part of the demolition involved removing old lath and plaster from inside the walls. I had our contractor save me a bundle so...