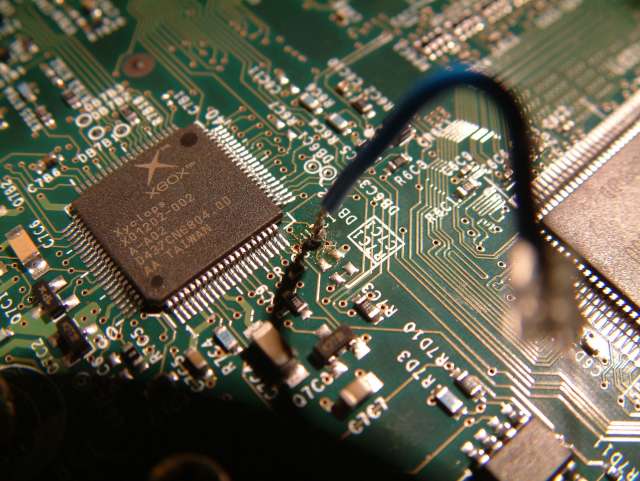 Shortly before the wedding and honeymoon came along our lovingly modded Xbox lost its will to live, blinking red and green when its power button was hit. Today I finally had some down time to find and fix to problem. I'd opened up the case a couple weeks ago to investigate and found that a tiny, yet crucial, wire soldered onto the system's motherboard had come loose. The solder point is a pretty tenuous one anyway since the area I have to connect said wire to is less than a millimeter across. Nice and small, just what the anti-modding folks up at Microsoft would want.

No matter, I would slay the mighty D0 beast yet! With some time on my hands after returning from our honeymoon yesterday I took a trip over to Radio Shack and picked up a new soldering iron. Before laying into the Xbox I practiced a bit on an old modem board I had lying around. My idea was to get the wire's connection in place with solder then use some hot glue to further secure the wire to prevent future loosening. The practice runs on the modem went well and seemed to prove that the hot glue would hold well to the plastic surface of the board surround the solder point.

I then cracked open the Xbox, finally got the tiny wire in the tiny hole, added a dab of hot glue, then fired it up. Success! The box was back and we could again all the fun and games that come with a modded Xbox.

My apologies go out to Sarah's sister Stephie since we persuaded her to house sit for us while in Costa Rica by telling her a library of nearly 2,000 games would be available to entertain her. Lo, time didn't permit my fixing the Xbox until now. We'll have a gaming party sometime so you can come up and get your fill! 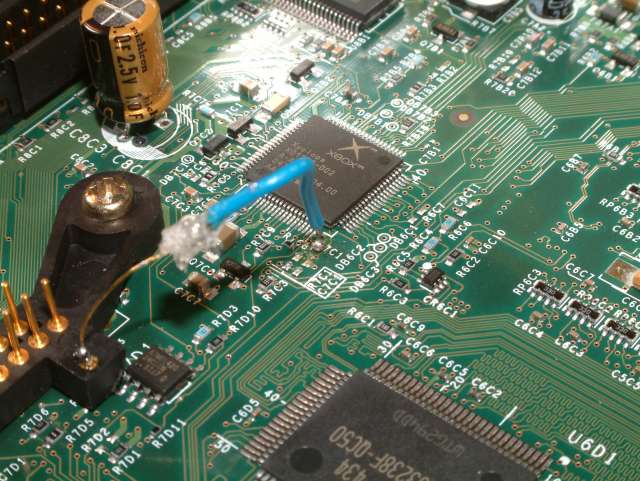 Dec. 26, 2004
Since buying Sarah and Xbox for Xmas she's been excited to purchase a chip that allows us to modify the system to do far more than just play Xbox...

Nov. 29, 2004
Yesterday before leaving Vancouver Sarah and her mom visited the mall where Sarah picked up her early Xmas present: a shiny new Xbox. Mostly thanks to Aaron and Matt...