Reasons to Support Restoration of Winthrop Hotel by Erik Bjornson

Thanks to local Winthrop fan Erik Bjornson for sending in the following post:

Over the last two months, my email inbox and ears have been filled by people describing to me why they support the restoration of Tacoma’s Winthrop Hotel. Here they are summarized below as well as a couple of my own. (I am sure Kevin will have his.) 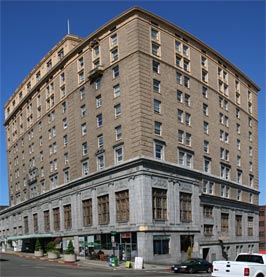 1. The historical Winthrop Hotel is an authentic and integral part of Tacoma’s history and culture and worth restoring. In contrast, few will travel to see a renovated apartment complex

2. Seattle, Portland, Spokane all have restored historical hotels. Aberdeen is in the process of a hotel restoration. Of the nearly dozen former Tacoma hotels, zero have thus far been restored.

4. The north portion of downtown Tacoma formally had 4 functional historical hotels. However, none of them are available for visitor accomodation.

5. Large high-density, high-rise low income housing projects have been a failure in many cities due to increased crime and disorder. Such a design is against the recommendation of HUD. (See Creating Defensible Space, Newman 2004)

6. The City of Tacoma has spent or committed to spend over ten million dollars on light rail, the Pantageous theater and on the upcoming LID street improvement work on Broadway in the Theater District. The expenditures of taxpayer funds will be of limited use if visitors have no overnight accommodation.

7. Dozens of Tacoma architects, preservationists, builders and craftsmen have been working during the last few weeks to design a plan to restore the Winthrop Hotel and address low income housing issues. The City of Tacoma should assist the restoration of the Winthrop, not spend $1,000,000 in taxpayer funds to squelch their efforts.

8. Final reason Tacomans favor restoring the Winthrop Hotel: Do we really want to be behind Spokane and Aberdeen?

What are your reasons for restoring the Winthrop Hotel?

Note: The fate of the Winthrop Hotel will be decided on September 12th by the Tacoma City Council at 5:00 p.m. 747 Market Street. If you have not done so already, please contact your city council members on the issue and let them know how you feel. (Click link above to send a standard modifiable email to all of the city council members).

Erik Bjornson is a family law attorney practicing in downtown Tacoma. He writes frequently on urban planning and the health of cities in the Tacoma News Tribune.


Warning: count(): Parameter must be an array or an object that implements Countable in /nfs/c03/h05/mnt/55409/domains/kevinfreitas.net/html/blog/blog-post.php on line 73

Aug. 9, 2006
Thanks to local family lawyer Erik Bjornson for sending in the following post: The historical Davenport Hotel in Spokane was built in 1913 as a grand hotel in the city....

Sep. 25, 2007
An afternoon meeting of the Economic Development Council today had Prium providing an update about the Winthrop. The replacement low-income housing was the key topic the City wanted to...

Feb. 3, 2007
The News Tribune is reporting that as of Jan. 31 Prium Companies now holds the deed to the Winthrop. No press release yet from Prium but AF Evans sent...

Nov. 10, 2006
Sounds like the developer AF Evans is sniffing around for more funds from the City of Tacoma to maintain the Winthrop as affordable housing. An email from KFnet friend Erik points...
Query failed with error You have an error in your SQL syntax; check the manual that corresponds to your MySQL server version for the right syntax to use near 'AND bc.active = 1' at line 4