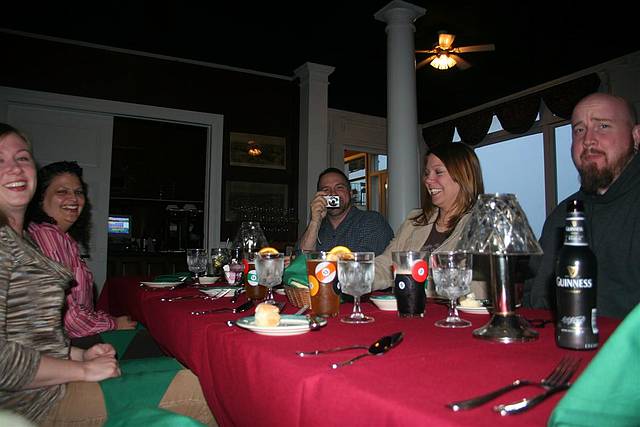 That's right, since this Monday was my lady's birthday we decided to go out last Saturday night to try out Winfield's Twisted Cue Club. After a surprise guest joined us we got down to business.

Staff seemed a bit short tonight but we were dutifully served by one of the bartenders who even put up our friend Josh. ;) Some drinks to start then chef's rolls followed and were petite but delicious. Mandy and Josh tried out some potato wedges and gave them a positive verdict. Dinner itself came with soup, salad and a starch and, for my entree, more vegetables.

Salads all looked and were tasty and didn't have any complaints especially since the tacit consensus of happiness was reached since our sometimes boisterous group fell nearly silent. The soups came out second and my clam chowder was good. A little fresh ground pepper made it even better. Even notoriously selective Angela took a chance on the taco soup and liked it. Seems she was more a fan of the flavor of the broth than everything in it.

The wait for our meals seemed a bit long but we weren't in any hurry. I could, however, see the delay getting on the nerves of any short-tempered folks. Once everything arrived we again shut our talkers and got to eating. The prime ribs looks good as did the couple burgers that came out. My steak was probably a little underdone (which didn't bother me since that's actually how I wanted it despite asking for "medium") but went well with the garlic mashed potatoes and vegetables. Again, the timing is probably to blame but my buddy Steve pointed out that everything, while warm, seemed to have sat on a warming plate for a bit before being served. Kinks in a new restaurant that no one in our group fundamentally minded. 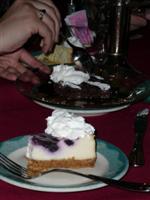 After all that food a few of us still had room for dessert. Only a couple in our group ordered but our waiter brought out a couple extra dishes. Don't know if it was because he was aware we were celebrating Sarah's birthday or if it was due to our patience as they work out some bugs but it was certainly appreciated. And good! A blueberry cheesecake Sarah tried sounded delicious and I was impressed by a brownie I was forced (yea, twist my arm) to down despite my contention that I was full from dinner.

Most at our table agreed that the prices seemed really downright cheap. Burgers came in around $7 once a topping or two was added and steaks ranged from $12 to $17 -- including all those sides, don't forget. For Sarah and I who both each had a drink, dinner and dessert everything came out to about $50 with tip. Not too shabby. I think overall the prices matched the food. No real stand-outs but a solid meal [obviously, given the above novel] worth writing about.

A live dance band started up some welcome noise in the lounge just off the dining room. This night had Aqua Velvet filling the air and, as picky as I can be about music, they kicked butt. Their energy on-stage was great and the two women singing had great pipes and worked some solid harmonies. We peeked in but were already destined to hit the Twisted Cue pool hall downstairs. 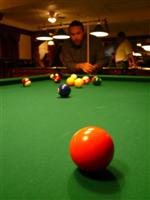 As I mentioned in my sneak peak back in March, this is owner Tom's pride and joy. And it didn't disappoint. Even with a decent crowd it was easy to snag a table. Most people were in large-ish groups all sharing a table rather than all the tables being taken up by two people each. We slid our fifty cents in a few times and filled the rest of the night we the fun of sucking at pool and having a couple more drinks from the nearby bar. Also, even though none of us smoked, we all ventured out onto the covered smoking deck just off the pool hall to enjoy the view over Stadium Way and across the glimmering utilitarian lights of the Tideflats.

Winfield's makes for a great full night from the food to dancing to enjoying a game of pool all combined with a great overall hospitality. That variety can easily keep you busy well into the night. Once we headed home I was surprised to realize it was 11:30pm -- which, in my books, is a good thing. If I were watching the clock all night that would tell me I wasn't having fun.

That being said, as I mentioned, there are kinks to work out. Such a historic building no doubt poses challenges to thoughtful remodeling but probably my biggest issues were, overall, easily changed and relatively minor.

Two easy ones. If there's not a band playing in the lounge, pipe some music into the dining room. Everything seemed a little too quiet if no one was talking and even with only a group of six fun-loving people I felt a bit self-conscious concerning the other diners if we broke out in laughter. The other quickie is that some of the signage above doors and pointing you to this and that seems amateur. Maybe once things get further along some custom signs would do nicely. Oh, and I know I said two, but another easy change would be to add a divider of some kind behind the row of booths we sat at. Divider why? Well, there was a walkway between our backs and the wall that led to a men's bathroom right in/off the dining room itself. I'm sure this is something not easily overcome without major renovation but a divider would just make the whole thing feel more comfortable for dining and for anyone on their way to conduct their business.

The only other, more subjective, suggestion I'd make is decide on the atmosphere. Match the seemingly formal decor to the prices and food or match the decor to the food and prices. My vote is to ditch the formal burgundy table covers, pipe some music in and be a full service grill. Though there's plenty of competition for that kind of food in town no one has the views and history of this place along with the great options for provided and self-service entertainment.

In being pretty verbose above don't mistake anything I wrote as a show stopper. We'll be back and we'll bring friends and relatives. This place is a gem that will only strengthen the expansion of downtown as a destination for locals and visitors from nearby looking for some great options to help fill their days and nights. 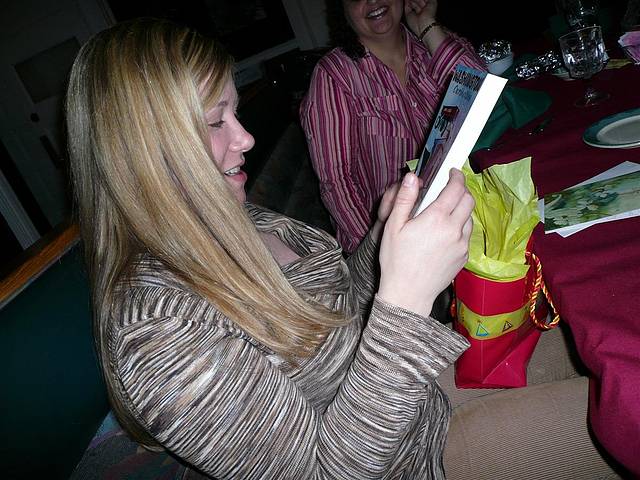 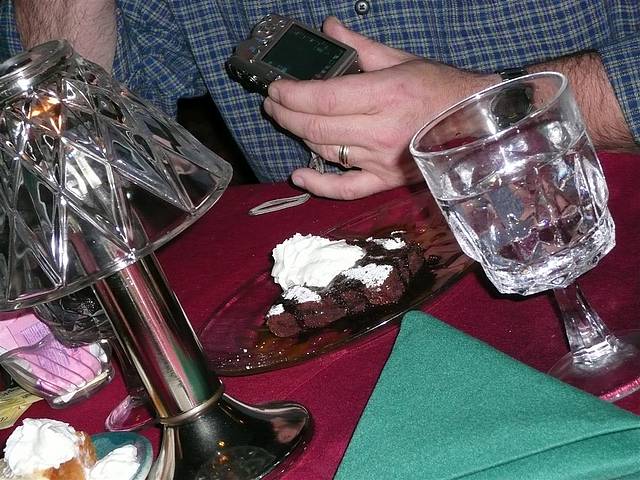 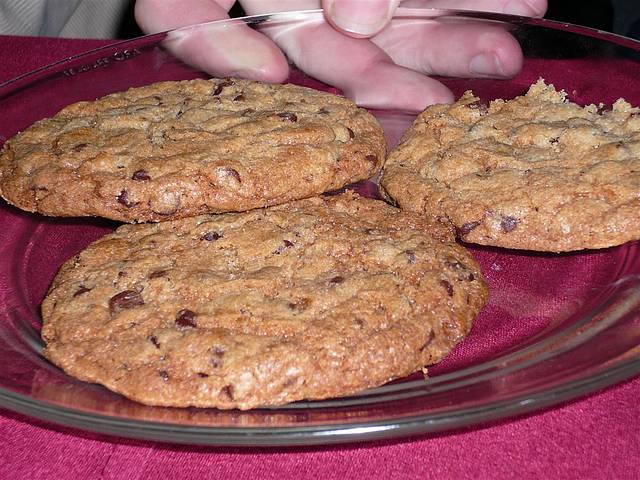 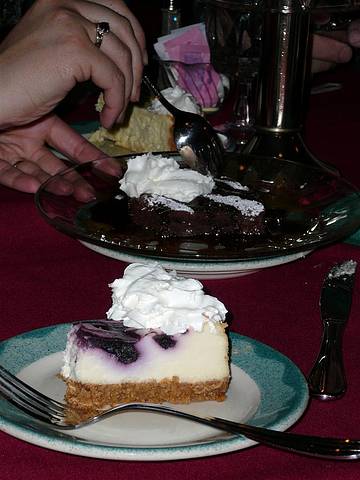 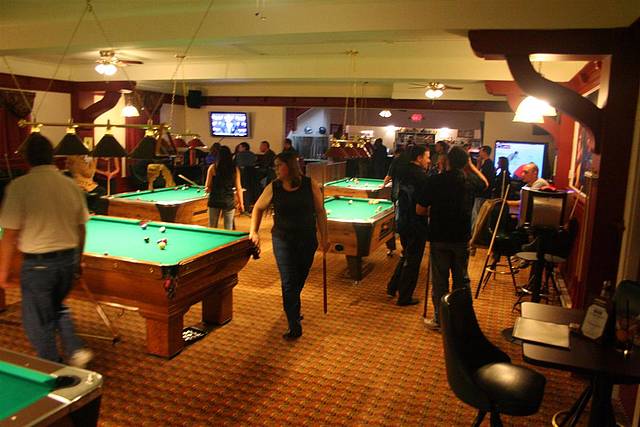 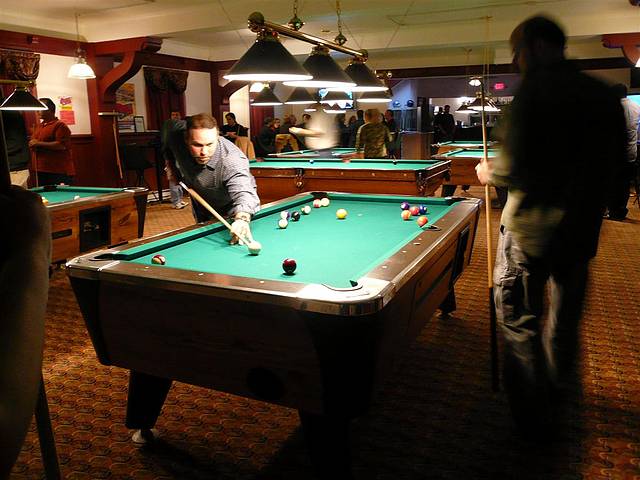 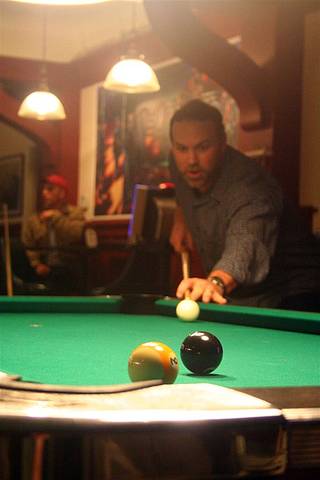 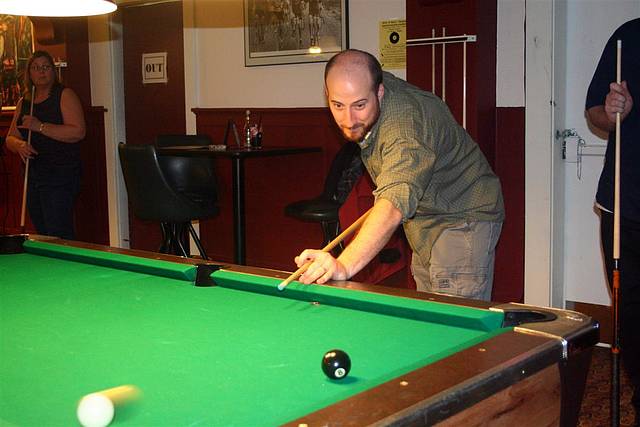 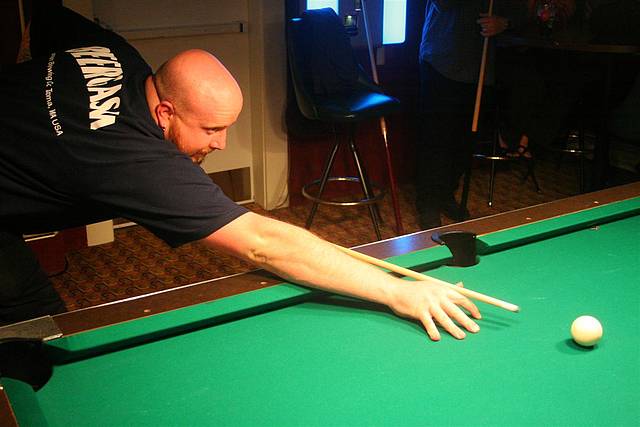 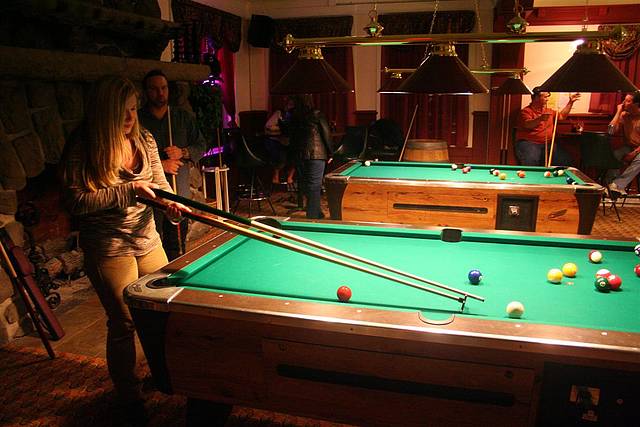 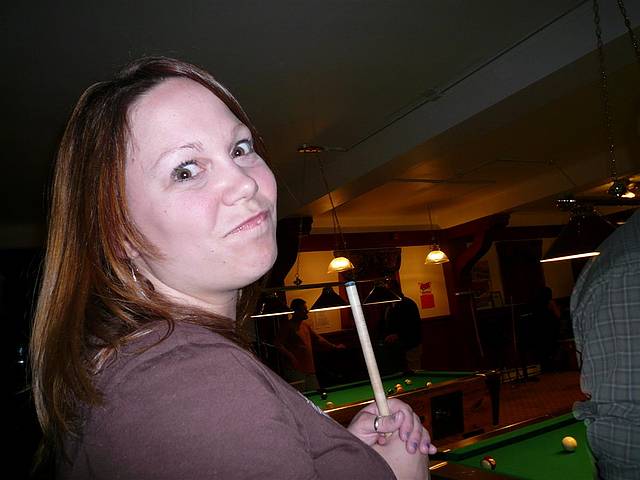 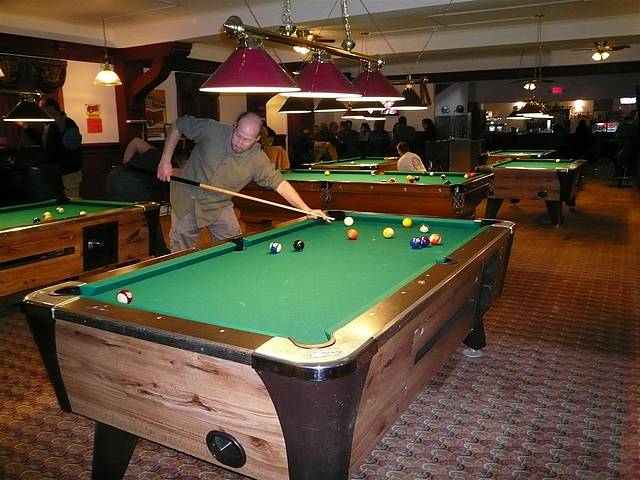 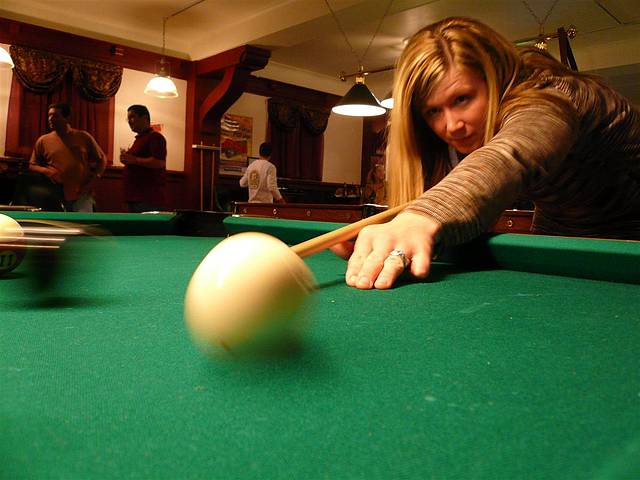 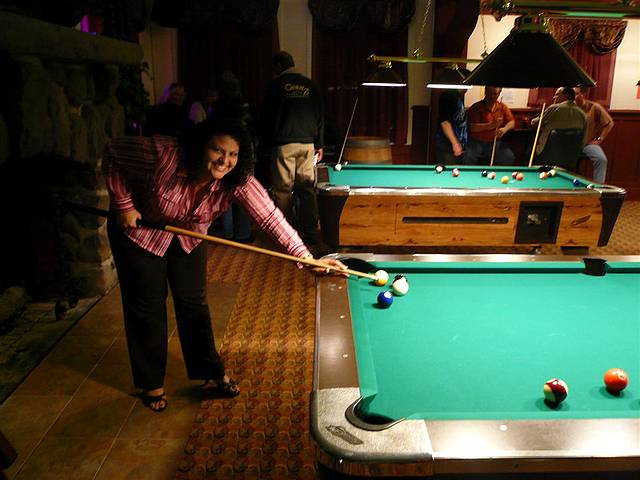 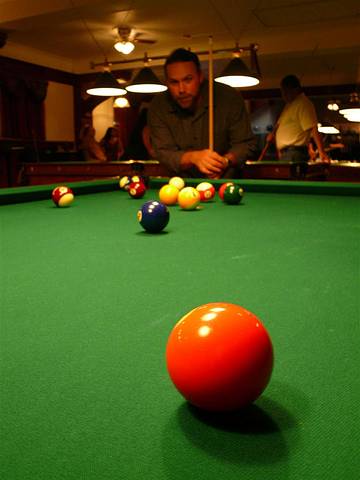 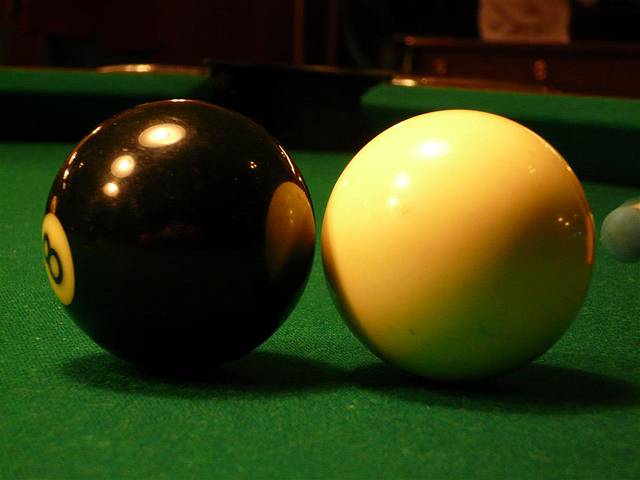 Jul. 25, 2007
Intrepid KFnet friend Erik B. tossed a comment on an old entry that Winfield's Twisted Cue Club is out of business and closed. I'll look into it and have...

Mar. 5, 2007
The reported spring re-opening of the former David's on Broadway looks to be moving along nicely. Winfield's and the Twisted Cue Club have a banner up and there's also...

Nov. 5, 2011
For a November Saturday it was certainly a stunning one out there. I enjoyed a walk downtown and snapped a bunch of pictures of the beautiful buildings nearby on...