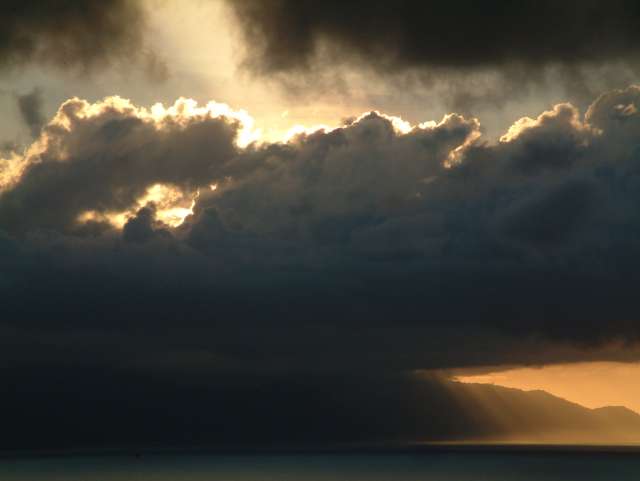 Rain in a rainforest?

Today we experienced the rain in the rainforest and I sampled the sights at the local beach. This morning we enjoyed our first breakfast here at Lapa Rios. I ordered up a plate of French toast while Sarah got a stack of banana granola pancakes. Both were excellent and came with our choice of maple, coconut, and mango syrup. I went for the coconut and mango syrups myself since I seem to be willing to try pretty much any food that I either can or cannot pronounce. We went back to our cabin after choosing a couple pairs of boots that would fit us for our excursion today. While picking our activities while here at Lapa Rios it was pretty easy to fill one slot since anything with the word "waterfall" in it attracts Sarah's attention. So, the hike today took us into the rainforest to a waterfall of unknown beauty.

Our hike was guided by Lapa Rios employee Edwin who met us at 9am at the main desk. After choosing our walking sticks we followed the same path into the Carbonera river valley. Instead of just crossing the river to see the waterfall nearby Edwin led the two of us upstream. Our boots proved useful since much of the trail consisted of us winding from one side of the river to the other. Along the way Edwin pointed out many plants and even some animals the inhabit the Osa Peninsula region. After four years leading this hike and ten working at Lapa Rios he's quite an authority. An hour or more into the hike Edwin offered up a plastic bag to cover my camera case in because a rain was coming down. It's a good thing I took him up on the offer since that rain soon turned into a downpour of rainforest proportions. The unusual precip doesn't but spit here and there during the dry months (which is now) but we got a good soaking for a half hour or more until we reached the falls. The pool at the base of the waterfall is too shallow for swimming so we instead climbed a few short tiers of rock up towards the main falls. Limestone makes up the path of the waterfall and it doesn't so much fall as it does slump against the smooth rock wall. Sarah enjoyed dipping her feet in a trough carved out by the water while I snapped photos and looked for fresh water shrimp with Edwin in a nearby pool. We stayed as long as was reasonably possible but soon headed back to the lodge for lunch. We met with another, albeit more brief, bit of rainfall that seemed to help the forest gleam once the sun again began to shine.

After lunch Sarah crashed for a lengthy nap while I decided to set out on a little adventure down to the beach. I dawned my flip-flops, some water, my rain jacket and the camera before trudging down the road that leads up to Lapa Rios. I was slightly uncertain of the path to the playa but I had to remind myself that no matter what kind of road or path would take me there it wouldn't necessarily be paved (ha!) or even well marked. Good thing I kept this in mind since I would've ended up out on the Pan-American highway before hitting pavement. After today's earlier rains the road/path to the beach consisted mostly of mud that squished up through my sandals and in between my toes. Hey, some people pay good money for such luxuries! The path just before the beach is lined with thick green bushes dotted with red or white and red flowers. Ahead is an arch of palm trees between which the beach is revealed. Many a hermit crab dotted the sand and some large groups of them scurried about around some source of food or another. I walked along out to a rocky point and saw a few pelicans cruise along just inches above the water, a couple crabs under some rocks just off shore that had beautiful blue claws, and a couple mutts that followed me nearly everywhere I went. They weren't stray, however, since a man kayak surfing just out a ways whistled at them a couple times while out and once he came ashore.

Then the rains came again. This time just to make my hike back up the hill a bit more difficult the mud that got on my sandals was left slick by the rain. This may not sound like a pain but it made every step a struggle not to slip out of them. I trudged up the steep hill back to Lapa Rios and found Sarah still sleeping in our cabin. She woke up and we spent some more time lounging before dinner. We had yet more wonderful food then retired to a room surrounded by rain, lightning and thunder. Although a couple leaks dribbled down from our ceiling the sounds and general atmosphere made up for it. Heck, we're from the and of rain in the Pacific Northwest so I'm pretty sure we can handle some nearly bath water warm stuff falling from these skies. 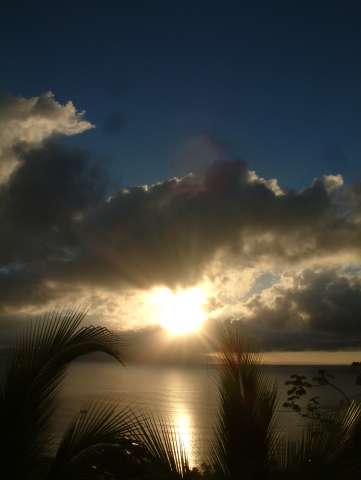 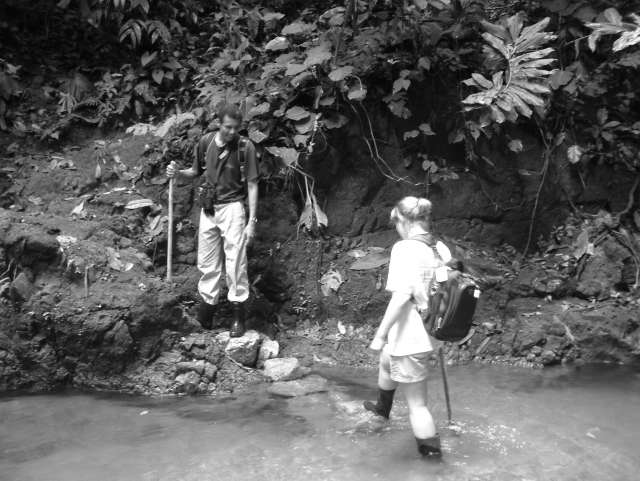 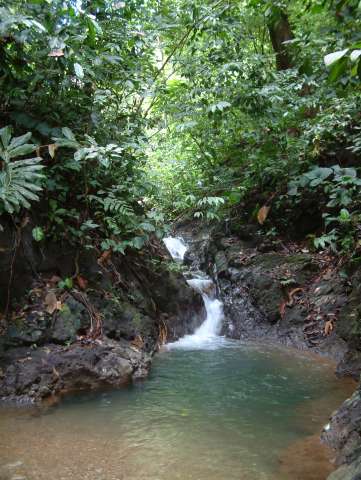 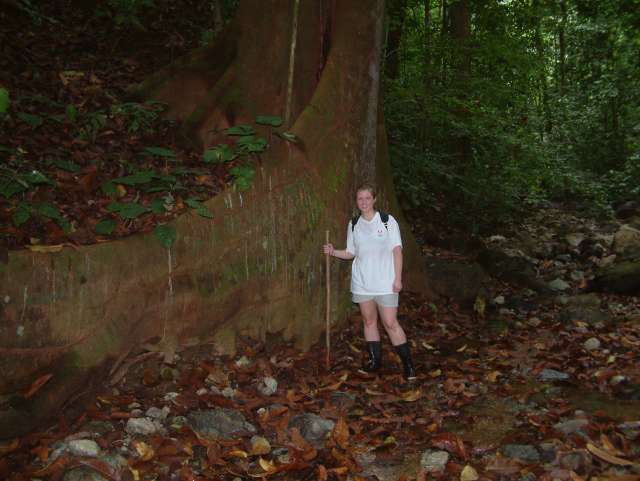 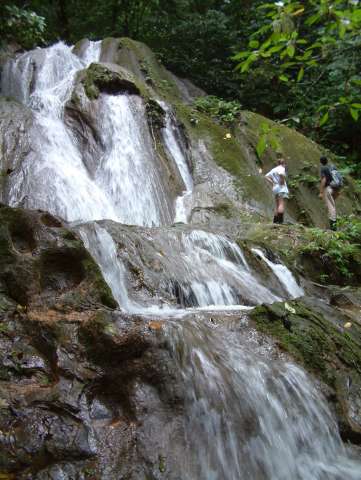 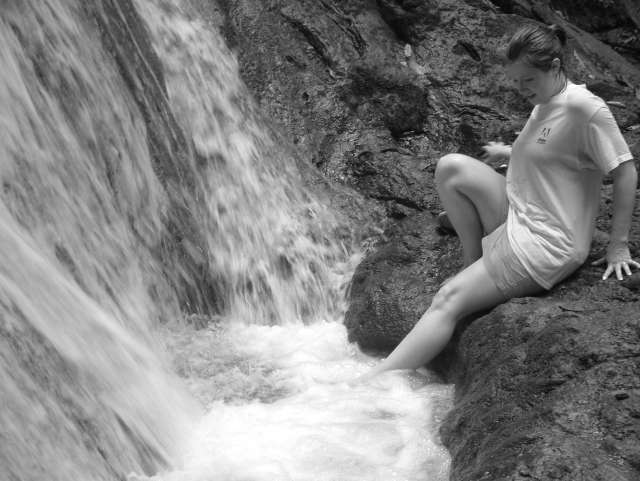 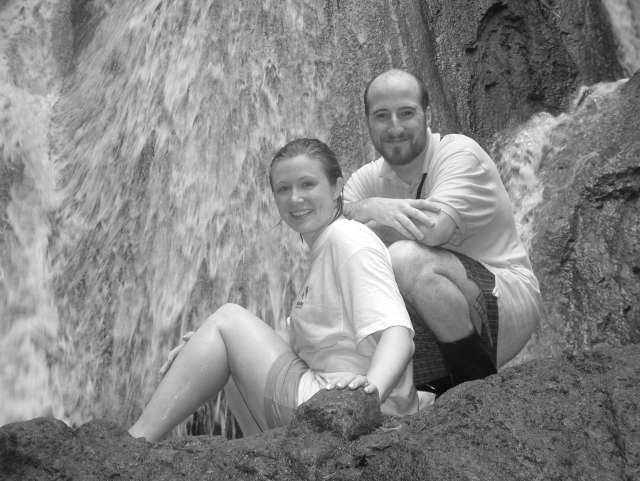 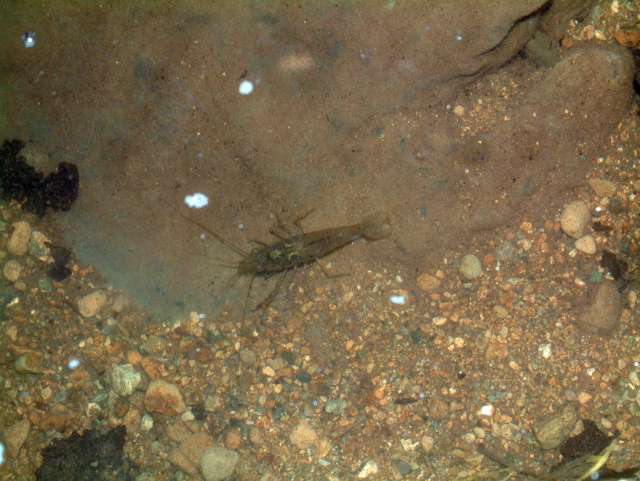 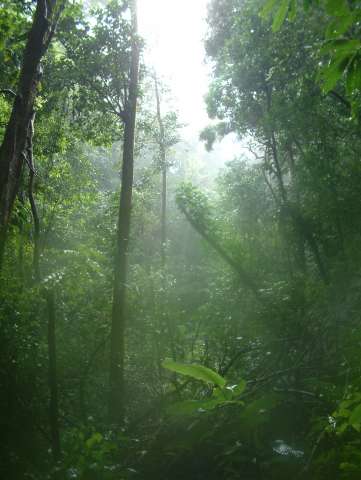 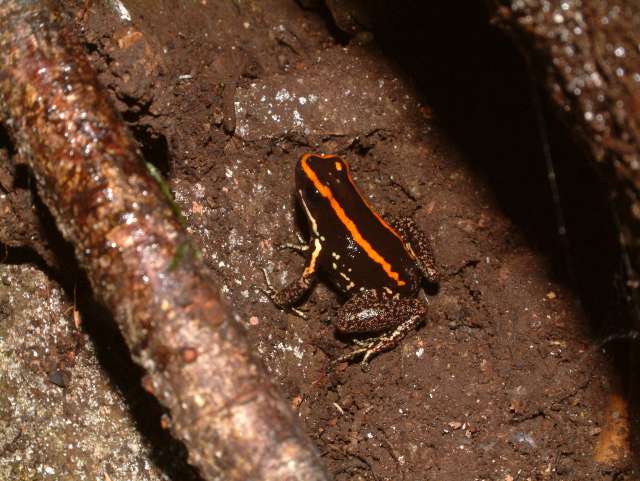 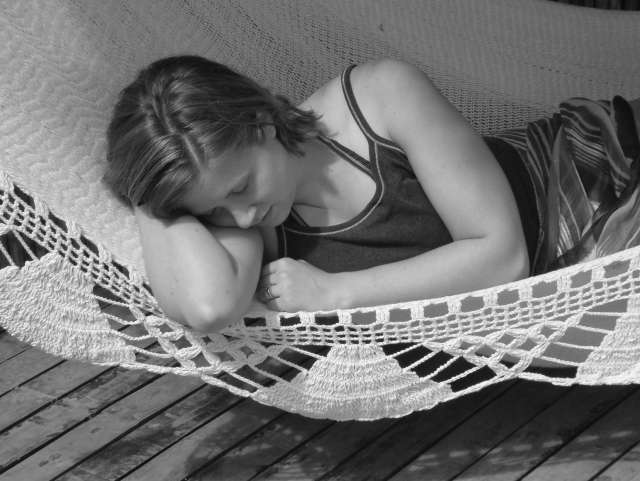 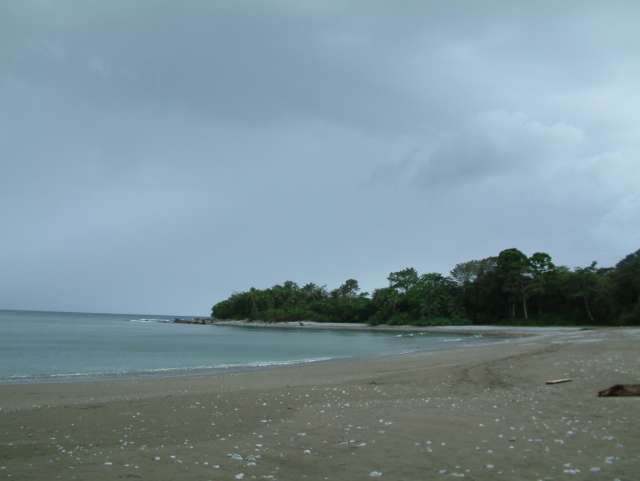 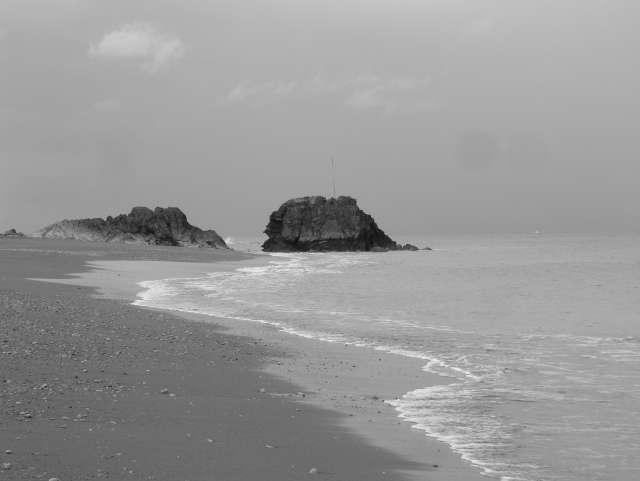 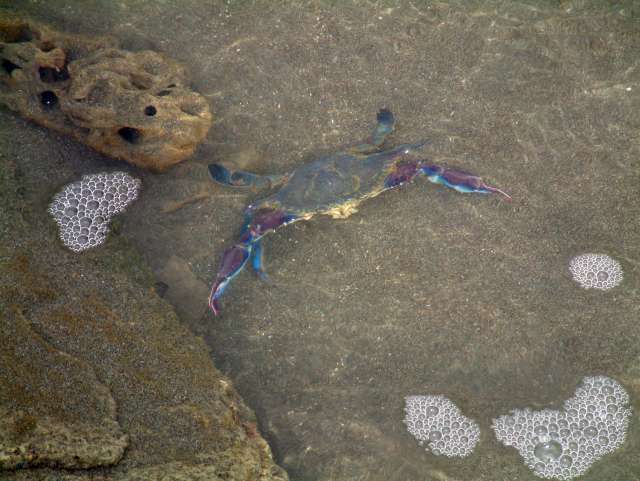 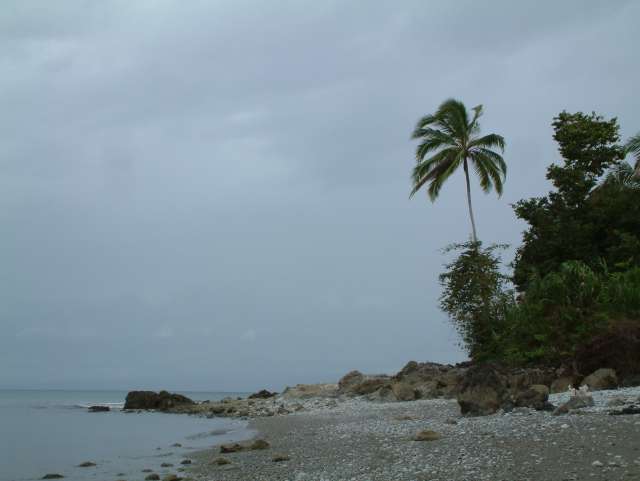 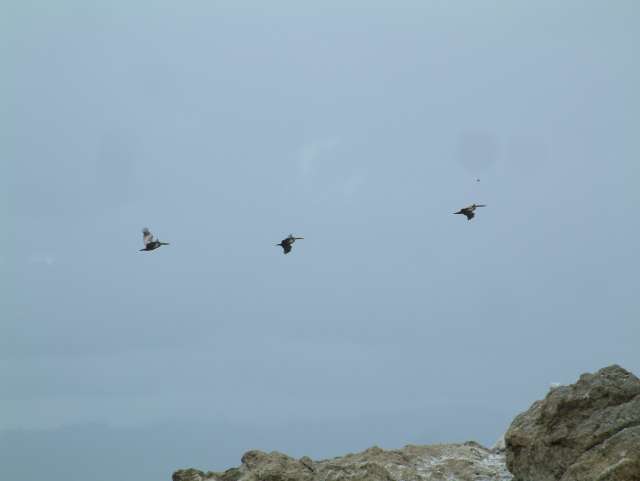 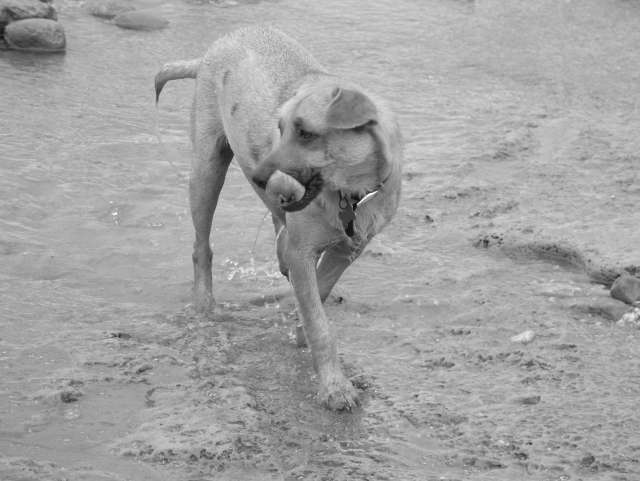 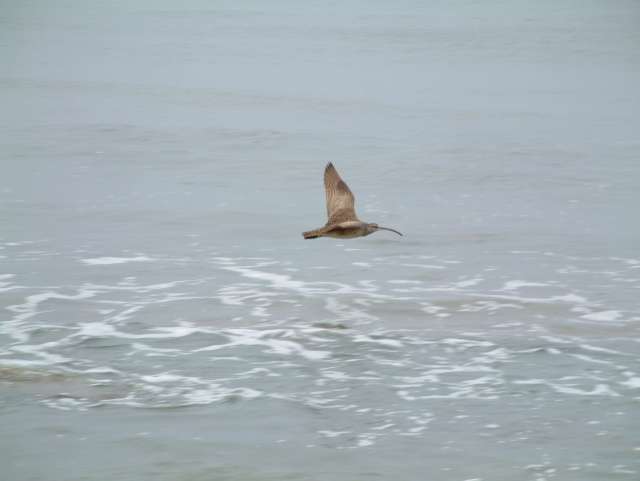 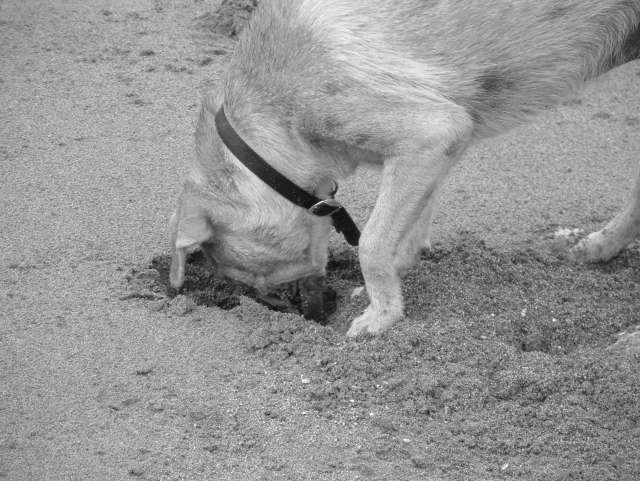 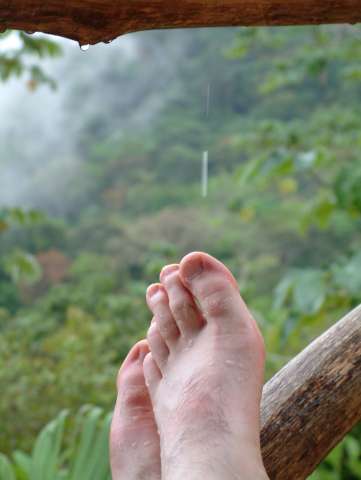 Bird watching and our private dinner

Jan. 21, 2005
Instead of signing up for morning a guided tour today Sarah and I opted to sleep in a bit and do something this afternoon. We did get up for...

Jan. 22, 2005
Sarah and I spent our last morning at Lapa Rios this morning. We woke up to our morning coffee delivery then showered and packed everything for our short flight...

Married in one month

Dec. 15, 2004
Next month on the 15th Sarah and I will be getting married out at Skamania Lodge. Although we're feeling pretty good about most aspects of the wedding and honeymoon,...